Short Title and extent - According to Section (1), This Act may be called the Hindu Marriage Act.

This law applies all over India a But not applies in Jammu and Kashmir and applies also to Hindu Domiciled in the territories to which Act extends who are outside the said territories.

This Case Read Sondur Gopal V/s Sondur Rajini, Air 2013 Supreme Court 2678 - The Hindu Marriage Act 1955 has extraterritorial application and this act applies to all Hindus, living in India and out of the country provided they are domiciled in India.

According to Section (2),  Application of the act - This act applies

Explanation - The following person are Hindu, Buddhists, Jain or Sikhs by religion as the case may be

(2) Notwithstanding anything in sub Section (1) nothing contained i this Act shall apply to any scheduled Tribes within the meaning of clause (25) of Article (366) of the Constitution unless the Central Government, by notification in Official  Gazette, otherwise directs.

(3) According to this act, such a person will be given the status of a Hindu post; Those persons who are not under him, but who are not Hindus, will be such a person whom this Act applies by virtue of the provision contained in this section.

We understand this from the case

If the parents of a person are converted from Hinduism of Christianity and he is born after the conversion and embraces Hinduism and the members of the caste accept him he comes within the fold of the case.

This Act applies to Hindu. Any child legitimate or illegitimate, both of whose parents are Hindu, would be a Hindu. Only one song parents is a Hindu father is admittedly a Muslim by reason of SEC 2(1) (c) Act is not applicable to a Muslims, Christan, Parsi or a Jew by religion. However as per clause (b) coming under explanation illegitimate child one of whose parents is a Hindu by religion, could also be Hindu provided he has been brought up as a member of the tribe, community group or family to which the Hindu parent belongs or belonged.

Those Personsssss are Hindu who recognised themselves as Hindus and who act according to Hindu religion and culture.

According to Section (3) clause (a), A custom has been adopted and followed for a long time in any group, community, tribe, and family by any place or region.

For example - In the olden day's Hindu marriage was followed by a pharaoh, it was then adopted by some community or group family such as wearing Mangal Sutra or filling the Mag

It has two provisions.

According to Section (3) clause (b),  From the District Court, we understand that any city area within which there is a civil court which empowers it under the Principal Civil Court, by notification in the Official Gazette by the State Government, empowers it to authorize the matter of the Act.

What is full blood and half-blood in Hindu law

Clause (c), Full - Blood - If any men and women marriage and he is born an only one child then he is full blood.

Half-Blood meaning - If any men and women already married and his wife dead or else alive. Then he marries another and his wife child a born. he is a half-blood descended.

Clause (d) Uterine Blood - Two people are said to be related to each other by uterine blood. for example, if any men and women already married but her husband dies then her wife another marriage but a common ancestress. then She is a child born than her child is uterine blood

Explanation - In close (c) and (d) "ancestor" includes the father and "ancestor" the mother.

Clause (e)  "Prescribed" means prescribed by rule made under this act. 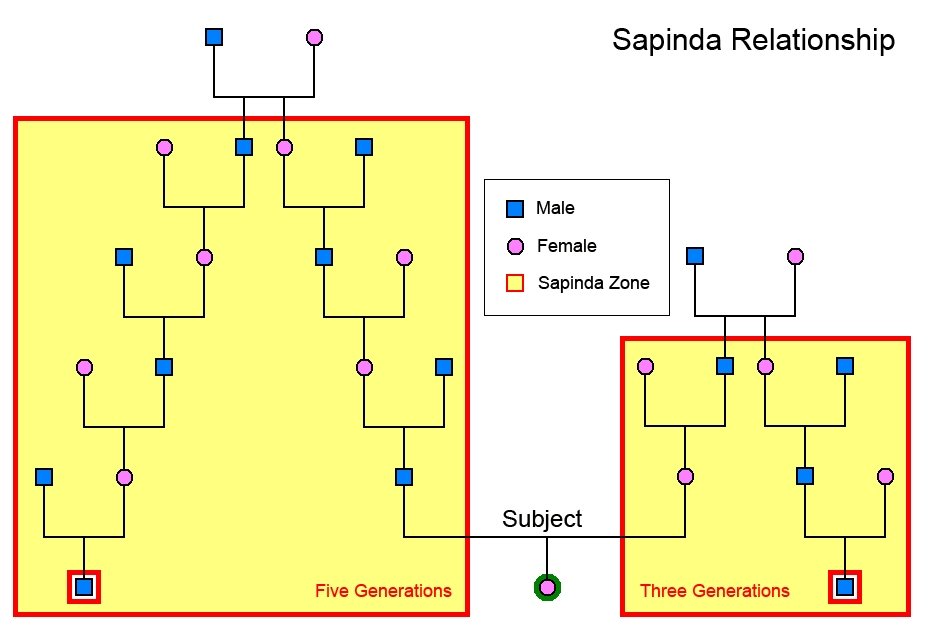 (ii) Two-person are said to be a Sapinda relationship of each other if one is a lineal ascendant of the other within the limits of Spinda Relationship.

Clause (g) Degree of Prohibited Relationship -  Two persons are said to be within the degrees of prohibited relationship.

Explanation - For the purpose of clause (F) and (G) Relationship includes

We understand this from the case

Custom has the effect of modifying general personal law, but it does not override statutory law, Uness the custom is expressly saved by it.

Custom must be proved by clear and unambiguous evidence. It can not be extended by analogy or logical process.

what is sapinda relationship

Two Person are said to be Sapinda Relationship of each other if one is a lineal ascendant of the other within the limit.

What is degree of prohibited relationship

if one was the wife of the brother or of the father s on mohter.

WHAT IS SUMMARY TRIAL Under Code of Criminal Procedure (Crpc)